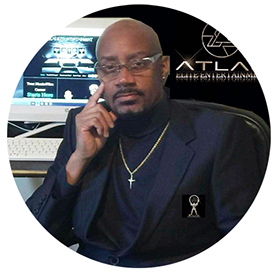 Visionary leader who works with imagination, insight, and boldness.  He presents a challenge that calls for the best in people, and brings them to together around a shared sense of purpose.

Short Bio
Rodney Crews has been in the music industry for the majority of his life.  After high school, he graduated from the Art Institute of Atlanta in Business Administration and Multimedia Production.    He was an intern A&R for Def Jam Recordings. He became interested in writing for movies and soon obtained his Screenwriter's Guild License and began to write scripts. Columbia/Sony Pictures picked up his script that will soon be on the big screen.

Though we all know one man can't change the world, Rodney believes AEE can all make an impact with what we do...The motto "Change The Game" comes to mind that describes what Rodney's mission and movement in the music industry is all about.  His plans are to ensure that everything we do at AEE has a major and inspirational impact on everyone.  He believes in using all blessings received to help put others in a position to live life on their terms.  His passion has always been to work in the entertainment industry and representing it in a positive manner.

Rodney has a strong motivation for wanting Atlas Elite Entertainment to make a big impact on the music and entertainment industry.  AEE’s upcoming movie entitled, "Destined 4 Greatness" is a reflection of his vision to promote independent artists in this epic motion picture.  Rodney’s plans to take it one day at a time as he continues to drive forward with his partnership in this company.  So far, he is living his dream that is already producing positive results.  It will be exciting to see how everything plays out in the future.